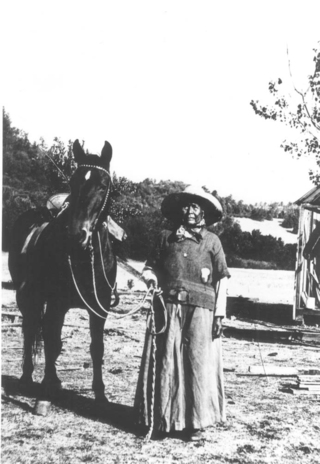 Lucy Young, a Lassik-Wailaki woman who survived the so-called "Indian War" period (late 1850s thru about 1865). Photo was taken after Lucy married Sam Young, a Round Valley small farmer. Lucy's grandfather was Chief Lassik who was shot and killed by white militia in 1862. Lucy's story will be included in "Yanks in the Redwoods."

In "KIlling for Land in Early California Indian Blood at Round Valley 1856-1863" I presented a summary of the events of the so-called "Mendocino Indian War" through eyewitness accounts by the California militia
s Captain Jarboe and others. Most Americans, fortunate enough to live in the United States today, have never experienced what it is like to be singled out to be shot at or in some cases executed by firing squad. However this is exactly what happened to many California Indians. Most of them were males but not all. And even if they were not killed by the so-called "Indian Wars" in California nearly all of California's Indians suffered loss of their sustainable habitat, hunting grounds, and homes.
This book presents news reports, personal letters, and depositions by participants as well as official war reports by commanders and soldiers in the field. What did it feel like as a young Army officer to be assigned to Nome Cult Farm in 1859 to command a small force of soldiers in the middle of the killing ground between settlers who jealously guarded their ranches and farms, Indian "wards" on the reservation, and reservation officials anxious to protect the reservation's corrals, out buildings and structures? What side would YOU have taken? Find out how the actual participants felt about this exciting frontier.

Yanks in the Redwoods presents life on the frontier of the Northwest, focusing on a one-hundred-mile region of the Mendocino Coast, 70 miles north of San Francisco, in northern California.

Covering the period of 1800–1900, the book presents several never-before- published accounts by participants, the individual stories and documentary details of families going about their personal and business activities. Each glimpse of their experience leaves us curious for more; yet added together the evidence belies the myth Americans hold dear, the myth of the noble pioneers, the white settlers as solitary heroes/heroines who on their own tamed a wilderness. These hardy folk were remarkably self-reliant and they did lay the foundations of towns and cities that grew beyond their wildest imaginings; but they did it by pulling together, not by going it alone.

The founders of the Humboldt Bay Community are seen through the eyes of George Gibbs, Customs Collector, Astoria, OR. A unique look at the Oregon Trail, derived from the notes jotted down by Jesse Applegate and Stanley and Clarissa Taylor, debunks the Hollywood image of the hostile Indian. Then, sparely-written diary entries convey the pungent flavors and kernels of wisdom squeezed out of a life of hard work in a family timber business and the almost speechless surprise when corporations quickly moved in and muscled the founders out of their own enterprises.

Even here, in the second half of the 19th century Big business destroyed precisely the economic independence and community life which these iconic American settlers had worked so hard to build.

The book contains personal accounts by John Work, leader of the Hudson Bay Co. Expedition to the North Coast, and by Jerome and Martha Ford, founders of the Mendocino Lumber Co., and the fraud investigation of Thomas J. Henley. It tells of the founding of Mendocino and Ft. Bragg, the experiences of the Chinese community, the role of “Dog Hole” schooners, and the opium trade.