As part of The Bodega Land Trust's "2018 Walks & Talks Series" I will be presenting sections of my 2014 biography, "Blood Will Tell Divvying Up Early California from Colonel Juan Bautista De Anza to Jasper O'Farrell." This event will happen in Occidental at the Salmon Creek Falls Environmental Center at Salmon Creek School from 2:00 to 4:00 PM on Sunday October 14, 2018.

O'Farrell was part of an Irish royal family, born in 1817, graduated from Dublin University with a surveyor's degree, toured South America with a British surveying party, learned Spanish while living in Valparaiso, Chile, emigrated to Sausalito in 1833, became a Marin county ranchero, surveyed towns and ranches throughout northern and southern California, was a soldier during the Pio Pico Rebellion in 1845, planned the city of San Francisco in 1847, was a successful gold miner in 1848, received the Canada de Jonive Land Grant, was a father of two sons and three daughters in his marriage to Mary McChristian who had immigrated with her family from Missouri in 1845 to California with the Grigsby-Ide Party, hosted many Democratic Party dinners at his home located on O'Farrell Hill overlooking Freestone, California.

O'Farrell was a philanthropist donating to San Francisco's Donner Party relief, a lot he co-owned on Market Street to the Catholic Church after a disastrous cholera epidemic (1852),and the land and materials for Bodega's St. Teresa of Avila Catholic Church. He had a special place in his heart for the Catholic Church supporting missionary priest Fr. Louis Rossi in 1860 by supplying him with an Indian guide and horses for his carriage as he served the Diocese of Northern California as well as food, money and lodging.

He served as Sonoma County's Assemblyman in 1858-60 and was the author of the "Majority Report of the Special Joint Committee on the Mendocino (Indian) War-State of California, March, 1860. He employed a number of California Indians in his household and his work in the Legislature showed his passion for truth, equal rights for all and opposed rapacious businesses. By his decisions in selling parcels of land, he only chose settlers whom he trusted would care for the land and preserve timber resources including the Bohemian Grove of Redwoods, O'Farrell was an environmentalist. He truly was a Renaissance man and a modern transitional figure in California history.

Brief authors' presentation: April 29, 2018 at 9:10 AM to 11:10 AM @ Farlander Hall, Church of the Incarnation, 550 Mendocino Ave, Santa Rosa, CA. Along with other authors, I will be discussing what I've learned in doing research for each of my three published works.

The latest book signing/reading for "Blood Will Tell Divvying Up Early California from Col. Juan Bautista de Anza to Jasper O'Fattell" will be at 7 PM on Wednesday, December 14, 2016 at The Union Hotel Restaurant, 200 Mission Blvd., Santa Rosa, CA at a meeting of the Sonoma Caounty Professional Land Surveyors organization.
All are welcome!

May 16, 2015 at 1:30 PM will be my second presentation at Copperfields Books, 762 Kentucky Street, Petaluma. The bookstore terms such events as a "Meet N Greet."
I will read a few passages from the work and tell a little about how and why I wrote it. 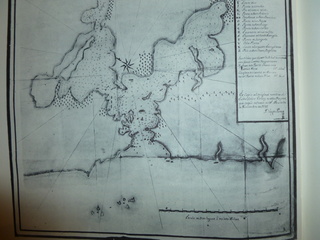 A Spanish explorer's concept of the SF Bay Area, ca. 1776